Nestling within the depths of the Thar Desert, is the stronghold of the Rathore clan, Jodhpur, once the capital of the former princely state of Marwar, the second largest city of Rajasthan, after Jaipur. The town was once known as Marwar, which means 'Land of Death', probably, referring to the harsh desert climate. It is an island of marble palaces, cordoned off from the desert by a 10-km-long wall made of stone with eight gates facing different directions built about a century after the city was founded. There are about 100 towers in the city, most of which are surrounded by defensive battlements.

Flanked on its western side by the Mehrangarh fort, and on the eastern side by the stately sandstone Palace of Umaid Bhawan, the monuments, temples and gardens of Jodhpur depict a multi-faceted grandeur.

Founded in 1459 AD., by the Suryavanshi Rao Jodha, Jodhpur was and still is a flourishing trading centre that began its existence in the 16th century, as one of the leading centres of wool, cattle, camels and salt. Jodhpur's fascinating history is replete with sagas that tell the tales of proud kings, brave warriors, court intrigues and colourful stories of valour and romance. Even today, Jodhpur retains much of its medieval flavour and ambience that instantly bring to mind the grandeur and glory of another era. Dotted with palaces, havelis, temples and houses washed pale blue, the city and its people live under the watchful gaze of the imposing Meherangah Fort.

Jodhpur's heart beats in its crowded bazaars, in the maze of jumbled lanes, in the warmth and hospitality of a hardy desert people. The city’s piece de resistance is undeniably the magnificent art noveau and art deco style Umaid Bhawan Palace, residence of the royal family and now a heritage hotel.

From Jodhpur, travellers can explore rural Rajasthan and its desert villages, where the rare black buck, an antelope indigenous to the region, is protected by the Bishnoi people, a local tribe renowned for their environmental concern. In desert dwellings, visitors can taste traditional foods and purchase Bishnoi handicrafts. Also near Jodhpur is Rajasthan's largest group of early Jain and Hindu temples on the outskirts of the small oasis, Osian. No matter what your reason for visiting this blue city, you are sure to fall in love with the romance of the place. 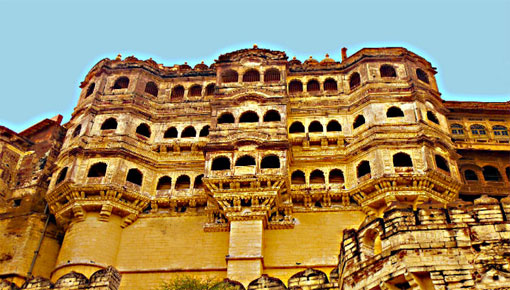 Situated on a steep hill, Mehrangarh Fort is one of the largest forts in India. The fort has been a witness to the splendour of a bygone era. The beauty and the grandeur of numerous palaces in the fort narrates a saga of hard sandstones yielding to the chisels of skilled Jodhpuri sculptures. To enter the Mehrangarh fort, seven gates have to be crossed. Some of these gates still bear marks of many a siege that this fort has withstood. Its very hard to imagine how any invader even thought of conquering this fort, which at places has 17 feet thick and 68 feet high walls. The Mehrangarh Fort encloses many palaces, which are known for their intricate carvings and sprawling courtyards. Moti Mahal or the Pearl Palace has a delicately carved stone screen and treasures the Sringar Chowki, royal throne of Jodhpur. Umaid Villas displays the Rajput miniature paintings and Ajit Villas exhibits musical instruments and the royal costumes. Both these villas are joined by a beautiful mirror room. 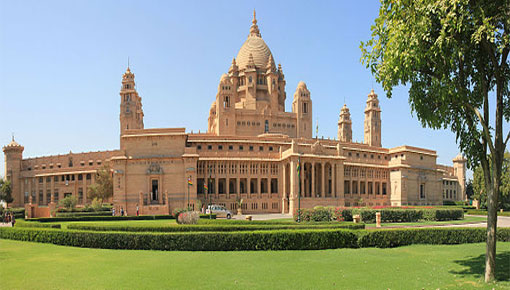 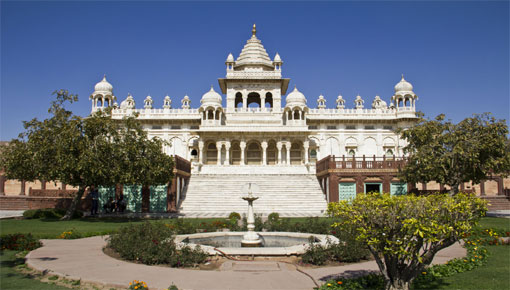 The Jaswant Thada is a flawlessly executed piece of Rajputana architecture that enchants you with its poignant appeal on your tours to Jodhpur tourist attractions with Indian Horizons. Un paralled in grace, the Jaswant Thada is a royal cenotaph that was constructed by Maharaja Sardar Singh to honor the memory of his courageous father, Maharaja Jaswant Singh II. The main cenotaph that is dedicated to Maharaja Jaswant Singhji is designed like an exquisite piece of jewelry, magnified out of proportion. The white marble Jaswant Thada looks like a lovely temple that entices you with its pavilions, domes and delicate looking pillars. Feast your eyes on the profusion of marble latticework that adorns the entire Jaswant Thada. See true to life portraits of Rathore warriors who ruled Jodhpur, admire colorful dedications to the maharanis and concubines of Maharaja Jaswant Singhji who committed Sati on the pyre of the deceased ruler. 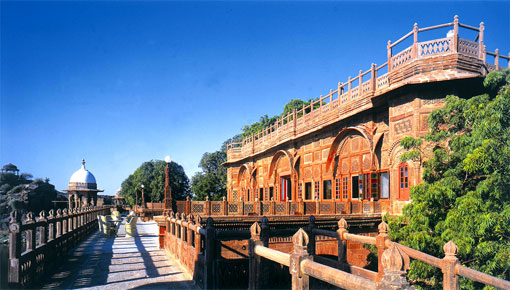 Sprawled over 300 acres of luxuriant greens in a valley ensconced with sandstone hills, the Balsamand Lake Palace is located on the Mandore road that lies at a few kilometers from the main Jodhpur city. Overlooking the serene Balsamand Lake, the Balsamand Palace is a 16th century heritage mansion that was constructed to serve as a summer palace for the Marwar royalty. The Balsamand Palace served as a tranquil summer getaway for the kings and queens of Marwar in the medieval era and today it offers a quiet retreat for those interested in spending a heritage holiday far from the noise and bustle of the bright city lights. The Balsamand Lake Palace was converted into a heritage hotel in 1996 by Maharaja Gaj Singh II.