The city of Jaisalmer is named after Rawal Jaisal, a Bhatti Rajput ruler. He founded the city in 1156. A local hermit advised him to set up his new residence on the Tricut Hills, abandoning the old fort at Luderwa. During the medieval times, Jaisalmer served as the main trade route linking India to Egypt, Arabia, Persia, Africa and the West. The 13th century saw the Jaisalmer fort being besieged for 9 years by the emperor of Delhi, Ala-ud-din Khilji. When the defeat of the fort seemed impending, the women folk committed Jauhar (self immolation).

The battle with Ala-ud-din Khilji resulted in the death of Duda, son of Jaitasimha and a Bhatti hero. Jaisalmer continued to be ruled by the descendants of Duda afterwards. The year 1541 saw another battle in Jaisalmer, with Mughal Emperor Himayun. Later Sabala Simha ruled Jaisalmer under the patronage of Mughal Emperor Shahajahan. He earned this right as a reward for battle distinctions in Peshawar. During the British rule, the state of Jaisalmer was the last to sign the Instrument of Agreement with the British.

The city of Jaisalmer in Rajasthan, India is divided into two parts - the old city and the new city. Once surrounded by a now battered wall, the old city has seen ages coming and going on. Amongst the many attractions of the city, the main one is Jaisalmer fort. Built in the 12th century, this fort provides a magnificent view of the golden desert below. The other attractions include massive havelis built by wealthy merchants of Jaisalmer. Also, a desert safari of the city, providing a glimpse of sand dunes, will leave you with a sight forever etched in your memory.

Withstanding the harsh climate and battering winds of the desert, the city of Jaisalmer has kept its age-old charm. Jaisalmer travel and tourism will take you back to the royal bygone era of the once princely state. The age-old traditions and culture of the city makes it a unique experience. This desert city weaves magic on you, leaving you speechless and mesmerized. The hostile terrain of the city fades in front of the warmth and hospitality of its people. 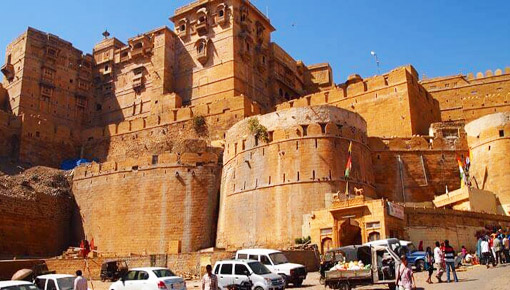 The havelis of Jaisalmer are stunning impressions of past glory and nobility of Rajasthan, India. Discover the splendid Jaisalmer havelis and enjoy the aesthetic architectural brilliance that greets you during your Jaisalmer tours. A profusion of colorful miniature paintings, glitzy murals and artistic frescoes decorate the walls of almost all Jaisalmer havelis. Enjoy tours to the havelis of Jaisalmer, Rajasthan and visit Nathmalji ki haveli, Patwon ki haveli and Salim Singh ki haveli. Uncloak interesting facts about Jaisalmer's historical past and get transported to a time in history that was characterized by grandeur and elegance. Some of these havelis are more than 300 years old and are steeped in an enigmatic and musty old world charm 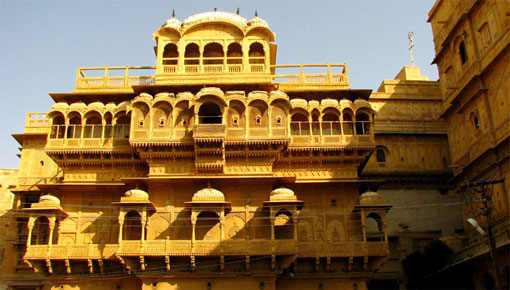 The Nathmalji Ki Haveli in Jaisalmer, Rajasthan was constructed by two architect brothers for the then prime minister in the royal court. Two life size yellow sandstone elephants greet you at the very entrance of the Nathmalji Ki Haveli. The two architects worked independently on two different wings of this exquisite haveli. The craftsmanship on both the wings are completely different though there is perfect symmetry in height.

Rajasthan Jaisalmer tours must definitely entail tours to Salim Singh Ki haveli that stands in mute testimony to the splendorous Jaisalmer past towards the eastern end of Jaisalmer city. This stately Jaisalmer haveli with its stunning blue cupola roof is resplendent with exquisite stone carvings, screen windows and exotic murals. The intricately chiseled brackets on the walls of Salim Singh ki haveli speak volumes about the love for detail and beauty among the artisans of those days. 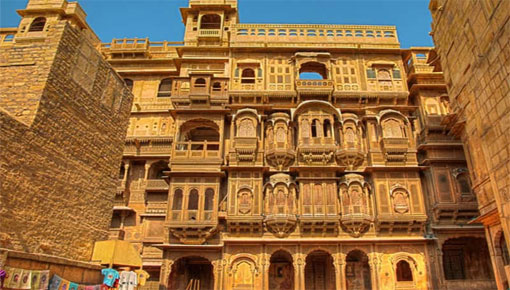 This is one of the largest and most elaborate Haveli in Jaisalmer and stands in a narrow lane. It is five storeys high and is extensively carved. It is divided into six apartments, two owned by archaeological Survey of India, two by families who operate craft-shops and two private homes. There are remnants of paintings on some of the inside walls as well as some mirror work.Patwon-Ki-Haveli is the largest & most elaborate haveli in Jaisalmer.

Sam village is on the edge of the Desert National Park. One of the most popular excursions is to the sand dunes on the edge of the park, 42 km from Jaisalmer along a very good sealed road. It is best to be here at sunrise or sunset, , and many camel safaris spend a night at the dunes. Just before the sunset jeep carrying loads of day-trippers arrive from Jaisalmer to be chased across the sands by tenacious camel owners. Despite of the tourist hype, it is still quite a magical place, and it is possible to frame pictures of solitary camels against lonely dunes. The desert dung beetles are fascinating to watch.

Gadi Sagar Lake is one of the most important tourist attractions in Jaisalmer, Rajasthan, North India. Its charm lies in the fact that it was the only source of water for the Jaisalmer city in the olden days. A manmade reservoir, the Gadi Sagar Lake in Jaisalmer, Rajasthan was constructed by Raja Rawal Jaisal, the first ruler of Jaisalmer. In the later years Maharaja Garisisar Singh rebuilt and revamped the lake. Located towards the south of Jaisalmer city the entrance to the Gadi Sagar Lake or Garsisar Tank is through a magnificent and artistically carved yellow sandstone archway that is known as the Tilon-Ki-Pol.