Rao Bikaji, a Rathore prince, founded the city of Bikaner in 1488. Bikaji was one of the sons of Rao Jodhaji, the founder of Jodhpur. The legend has it that Bikaji was provoked to set up his own kingdom when his father commented him about whispering in the royal durbar. Thereafter, he started building up his own territory to the north of Jodhpur. His first attention went to sterile wilderness called Jangladesh and he converted it to a remarkable city. By the time Bikaji died in 1504, he had extended his kingdom over 3000 villages. The modern Bikaner, as we see today got prospered under the reign of Maharaja Ganga Singh. Read on this Bikaner city guide to know more about the city:

Bikaner lies in the north of Rajasthan on a little elevated ground. A 7 km long besieged wall, having five gates, surrounds the city. Speckled with sand dunes, Bikaner occupied an important position on the ancient caravan routes. It served as a prime trading center to the merchants coming from West/Central Asia. Bikaner travel & tourism brings you across some splendid forts and palaces that serve as a legacy of the rich heritage of the city. Built up in red sandstone, these forts and palaces bring alive the architectural finery in which the state of Rajasthan abounds.

Bikaner in Rajasthan, India is still preserving the medieval magnificence that was once the hallmark of the state. Along with the amazing structures of the city, it is the cheerful people that further enhance the attractiveness of the city. Bikaner also houses one of the largest Camel research and breeding farms in the world. It is renowned for providing best riding camels in the world. Apart from that the Bikaner fair also attracts a number of tourists. A trip to Bikaner will leave you mesmerized with the grandeur of the city. 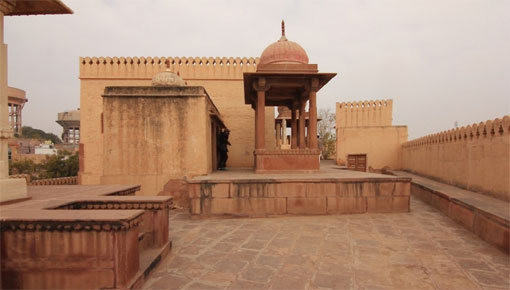 In the amidst of the magical landscape that Rao Bika started the construction of this fort in 1485 .Situated on the rocky ground south west of the city, the fort preceded the city by three years.

This fort was constructed by Rai Singh. The foundation of the fort was laid down in the year 1589and the work was over in 1594. The fort has a circumference of 985 meters. Being on ground level, a moat was constructed around the fort as security cordon. The fort complex is considered as an architectural feat. The important portions of the fort are Anup Mahal, Ganga Niwas, Durbar Hall, Har Mandir, Gaj Mandir, Sheesh Mahal, Karan Mahal, Phool Mahal, Chandra Mahal, Chini Burj etc. but Anup Mahal is the best place to be viewed. 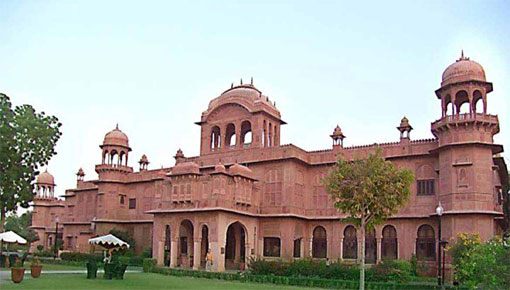 The architectural masterpiece in red sandstone, the palace was built by Maharaja Ganga Singh in the memory of his father Maharaja Lal Singh. The palace has beautiful lattice work and filigree work. Sprawling lawns with blooming bougainvillea and dancing peacocks make it a not-to-be missed visual treat. Part of the palace has been converted into a luxury hotel and a museum known as Shri Sadul Museum.